Whenever initiating a conversation, with a guy, about what he desires in a girlfriend I always seem to hear the same kind of preferences. He wants her to be natural looking, be that natural hair or no make up, maybe this consists of both. A homely girl, a woman who doesn’t seek enjoyment in socialising, partying and dedicating nights to destroying her body with alcohol and drugs. A reserved woman in the sense that she keeps herself to herself, this assures him that no male can ever alert him of his woman’s past or present behaviours, she is not bait in London lingual terms. A woman who can cook and clean as no woman is partial to a bit of sexism or male chauvinism. These women exist, I believe they do, or at least they keep up the appearance to keep the opposite sex happy. I refer to these women as plain Jane’s, no offence, if you are one embrace it there’s very few of you still alive.

The reason why I’ve decided to write about this topic is because I’ve come across a lot of guys who have managed to find their “perfect” woman that meets all the criteria above. I put perfect in quotation marks as we all know that it does not exist, to chase it is to overlook everything else which could hold potential that just needs to be nurtured. Any who, the emerging pattern I have seen is that even though they have found the woman that every man dreams of settling down with they still seek more. Is it boredom? Is it the intimidation of being with someone who is “perfect”? Is it a feeling of them not deserving her? They feel as though they have what is described as a good girl and I think the imagery of being able to get such a girl overwhelms the fact of whether they are compatible. It may become apparent further along the timeline that a good girl is unable to tame him or satisfy him. Personally I think that when looking for perfection you are trying to sight the easiest option, no fights, no arguments, someone who will comply. I mean in a way we all want a stress free relationship, except those guys who are attracted to crazy girls, I see you, but without anger or arguments where is the passion.

Ladies, we all want to be “that well rounded woman”, the one every guy wants. You can do everything which impresses him and more however does this mean not indulging in the activities that you enjoy. Why is it that the ideology of a good girl has to be so restrained? I don’t understand why guys let such things, as a female socialising or partying, determine whether a woman is compatible or not. The worst thing is that a lot of these guys who demand these standards refuse to uphold them themselves, e.g. she cant go clubbing but I can. What is so unattractive about someone who enjoys the same interests and hobbies as you, I would assume they have more in common with you than a woman who does not indulge in your lifestyle. I think this is where it all goes wrong. If you are willing to be a good guy then by all means find a good girl (by your guys definition not mine), if you are not willing to change in order to be the perfect guy for your perfect girl then the relationship will lose its balance.

This is only a short post but I have been holding out for a long time so I thought I’d give you a little something to keep you going. 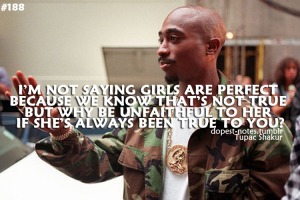