I spoke with my cousin the other day and as per usual he got me thinking. He asked me “what is your take on broken men and how are you, as a woman, going to play your part to fix them?” If you’ve bared witness to our convos this is the kind of thought processing it requires.

I had to think for a minute. I can speak about broken men all day, in fact I can talk about broken people all day, but I had never been questioned about how I planned to help with the cause. For a split second I even thought, why have I got to fix them? Is that my job?

Well yes. It is my job so to speak. It’s everyone’s job. Wait, let me break this down, it’s not my job to fix any man but I’m starting to believe that the damage is not always caused by previous experiences. A lot of the damage we carry with us is inherited. Beliefs that our parents have instilled. Raised and conditioned to think a certain way. It allows the growth of ignorance which in turn means no one wants to acknowledge that they are in need of fine tuning.

After thinking it through I responded, “My part in fixing them? Fix myself, I can’t change what has already been done, but if I have an understanding, I can raise men that in turn are not damaged goods, I can raise empresses fit for a King”.

This led us to talk about the importance of women (the womb-man) and our hand in raising society. I noted that the idea of the perfect woman is too simple and in fact dumbs down what a woman’s purpose and role is. Nowadays the emphasis is heavily placed on a woman being able to cook and clean. We are laughed at if we cannot participate in these activities. The attributes seem to be the considered major in regards to the quality of a woman. What about ambition? What about motivation? What about intelligence? Guys this is to be the future mother of your children, surely she needs to bring more to the table if she is going to nurture. 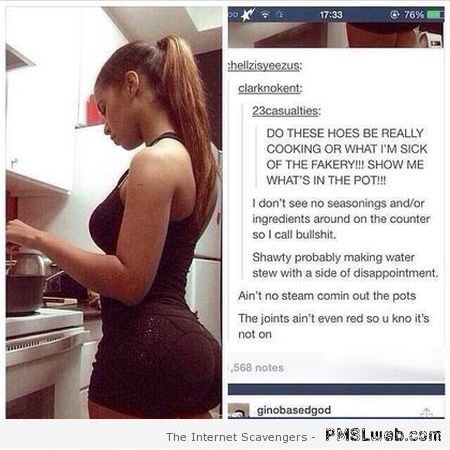 (Half naked women in memes cooking nothing with aromatic spices; oxygen and carbon dioxide, in a huge pot on the stove. The half naked model is the sex appeal but her cooking increases the appeal)

Life’s cycle starts with the woman who gives birth. That deems the female race vital. A man first learns how to respect a woman by reflecting on his relationship with his mother. His idea of what his wife should be like should centre around his mother. The only thing we should struggle with is teaching a boy to become a man as we have never had to take part in the process ourselves. We cannot advise from first hand experiences.

I refuse to raise a man alongside my children. I am not ruling out growth, no one is a perfect package, but we have to have the same drive for self fulfilment as we do to one another. My man should not be my child.

One thought on “How to Fix a Man”